Yesterday was Wilder’s first off-leash walk on our road. I cheated a little bit on my client rules but I’ll explain what they are and why  I cheated. 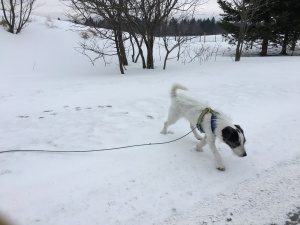 Now it’s easy to get a young puppy to do a rock solid recall.  They love their people, and love to get treats when they come to them. But when adolescence hits, just as with human puppies, the bigger world becomes more interesting than their people. They feel the need to explore a little further, investigate what that noise was they just heard, see how fast that cat can really run, etc. That is why my rules include being at least a year old.  A puppy who has a rock-solid recall at 5 months, may not respond the same way at 10 months, and it’s not due to lack of training as much as it is due to maturing. I want puppies kept safe, and keeping them a long line on them until maturity is one way I help them stay safe.

Being in a fenced area may keep them safe from traffic or disappearing into the distance. If there are no other dangers inside the fence, the puppy can be off line to run and play freely. However, if there are other dogs in the fenced area, one might still want to keep the pup close to you on a rope to protect them from bumbling up to unknown, and perhaps unfriendly, other dogs. In addition, humans must know not to call the puppy unless they are absolutely sure that the puppy will respond. Every time a puppy ignores your recall, they get better at ignoring. If the pup is on a leash and distracted, you can simply walk up to them and redirect them.

Once I become confident in my puppy’s response, but he’s still not a year old, I’ll simply drop the line and let him drag it.  That allows him to go further and faster, but I still have a good chance of preventing the loss of his focus to unexpected distractions. I can get close enough to step on the line (I make them 30-50 feet long and an appropriate diameter for the size of the pup) and then I have him.

Back to my own puppy. I was kind of surprised to find out how good his recall is. He goes with me to the barn for chores several times a day and since it is winter, the doors are usually closed up tight so he can play in the barn without risk of disappearing. He was on a line going to and from the barn, as well as on all walks, since his arrival in early October. When I had to put out hay, or dump a wheelbarrow, I’d put Wilder in the barn kennel with Eloise and they’d snuggle down in their bed together (Wilder snuggled, Eloise tolerated).

In the last couple weeks we have had some unseasonably warm weather and I had the barn aisle doors open to let some fresh air sweep through.  I didn’t want to keep the dogs locked in the kennel in that wonderful weather so I assessed what Wilder would do.  He was so happy to be outside, sniffing around and exploring around the barnyard. Chores took longer, since I kept checking to make sure he was still close.  In my training process, I teach the dog to be the one to check in with me, but Wilder is still in the training process. I could not rely on him so it was my responsibility to know where was. As it turned out, he was never far…yet I was uneasy if I couldn’t see him around a corner.  When he did check in with me, or come when I called in a panic if I momentarily couldn’t find him, he’d get a treat and/or a play session. Over time, I began to be more and more confident that he really was meeting my requirements for a rock-solid recall, at least in the conditions allowed.  I never let him get very far from me so I still can’t be sure of his response at a long distance or in new environments, but that’s what we’ll work on next.

The other requirement is that the dog be one year old…roughly mature. Some breeds take longer! As Wilder has an unknown background, we don’t know his age. With the clues we have, I am guessing he was a March puppy. As yesterday was February 28, I was technically cheating as I doubt he’s really a full year yet. However, I also know that Spring is a very challenging time for dogs due to the multitude of distractions when critters start waking up and coming out of their holes. (Fall is also tough, when they are doing the opposite. I even had to put Eloise back on a rope last Fall because of the moles and voles scurrying around storing up food and digging new tunnels in the fields.  It was just too much for her terrier brain to ignore.)

I know that in another month, we’ll be dealing with heavy environmental distractions. I don’t want that to be the time that I begin to try Wilder off leash as I’ll be setting us both up for failure. I decided that if I could do it now, then if I have to put him back on a line for a month or so when Spring comes, we’ll have a base to return to afterward, as opposed to postponing the whole thing until May! 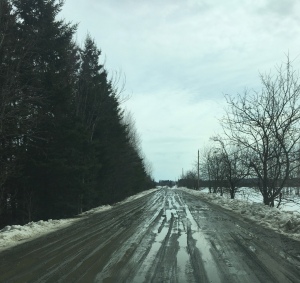 My biggest concern on the road is, of course, traffic.  We do not live on a heavily trafficked road, but the traffic that passes is too fast as our farm is along a straight flat stretch.  But right now, it’s very muddy.  VERY muddy. That slows drivers down or has them avoid the road entirely. That was a plus for me. Also, Wilder hasn’t learned to embrace mud yet. At least not the cold icy mud we have now. Which means he is careful about where he walks, rather than running pell mell up the road. If he climbs up off the road, into the snow, he can’t go far very fast either. There is still about a foot of slushy snow in the fields. With his short little legs, he has to wade through that to go anywhere which means I could still catch up to him with my longer legs that reach further down into the snow.

Finally, we’ve been practicing the “car” protocol since Wilder’s arrival.  Whenever I hear a car approaching, I call the dogs (in this case, Wilder has been on his long rope and Eloise has been loose), and they come to me and sit on the side of the road until the car passes. Then they get a treat and a release cue to go explore again (although Wilder is limited to the length of his rope).  Some days we see half a dozen cars, some days only one. But five months of that is a lot of practice and Wilder now turns to me automatically when he sees or hears a car. So we had that necessary behavioral component before heading out.

As one final tool, I took a hot dog out of the fridge, cut it into 100 pieces and put those into a small plastic container in my pocket.  Wilder will work for kibble in training sessions and I use store bought dog treats for around the farm.  He’d never had hot dog before and I anticipated they’d be over the top in value. Exactly what I wanted.

My hope was that as we went down the road, Wilder would offer to check in with me. I really did not want to have to call him if he got too far. This was continuing the training of giving him a treat when he checked in with me around the farm. If he’d offer to look at me as we walked along, he’d get hot dog pieces.  I’m sure I underestimate what dogs remember. He was quite aware of the wonderful smell of hot dog as I cut it up in the kitchen.  I know he watched me put the pieces in the container and put that in my pocket.  Did he remember that? It wasn’t until we got to the end of the driveway that he got his first piece. Stopping at the end of the driveway is another component behavior that I work on with all dogs.  I don’t ever want anyone dashing out into the road when we get there. Standard procedure is that puppies get clicked as they get to the end of the driveway and pretty soon they anticipate that and stop to look back at me when we get there. As grown dogs, they continue to get treats for this on a regular basis. I’m happy to pay for that to remain a solid behavior.

Wilder was as enthusiastic about the hot dog I handed him there as I anticipated.  Then I listened for cars, took a deep breath, and released him into the road.

Success! He was further ahead than I wanted him but I held out with fingers crossed and he did give me that offered check-in.  That was the furthest he got from me in the next mile long walk- even when we passed the sheep barn where he’s loved to go in and investigate on recent walks.  He got a hot dog piece each time he checked in for the first quarter mile, and then I started swapping out praise, body rubs, and play once in a while. But I kept the hot dogs at least a 3:1 ratio to the other reinforcers. On the return walk, he was practically doing a heel next to me.  That’s not what I really want as the purpose of these walks is for the dogs to explore and play and sniff around. But we can loosen that up over time. Having him nice and close, on his choice, is just fine for now!

The dog training gods were looking down on us because we did not encounter a single vehicle on our walk.  I was prepared to pick him up if a car went by just to ensure he didn’t pop out into the road unexpectedly (I did have the harness and rope tucked under my arm if things had not gone as I’d hoped). It was only when we were a good 25 feet back into the driveway that I heard a car come sloshing along.  I took the hot dog container out of my pocket and just sprinkled pieces in the driveway as I walked along, keeping his focus on me, the ground, and movement toward the house.

It was a very successful outing. I don’t know whether our next walk will be leash free or not. If I could control the traffic, I’d be more confident. But I will assess the weather conditions, the time of day, and all the other things which affect his behavior before deciding on any given day what I’ll do.

I am glad we have this maiden voyage successfully under our belt.